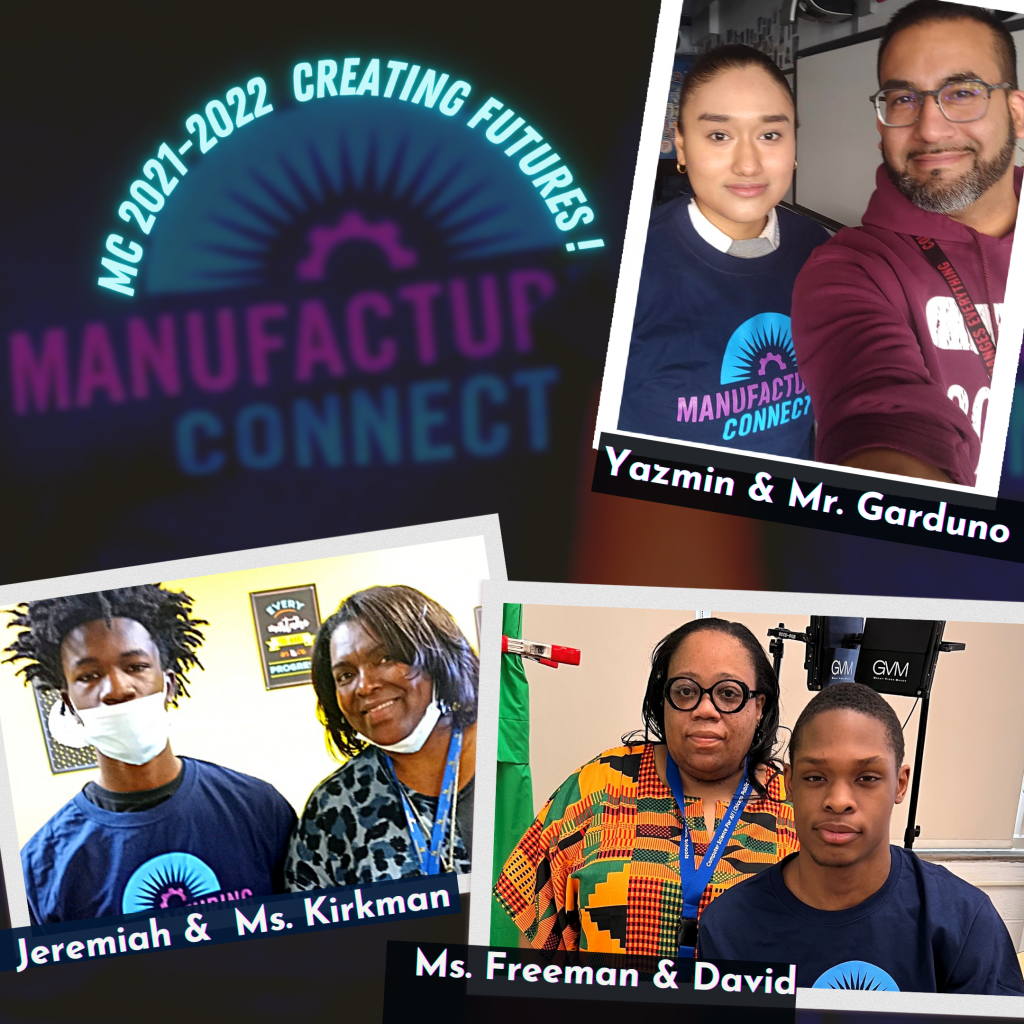 The latest session of Manufacturing Connect, our nationally recognized career pathways program for teens, started in January. We talked with a few student participants (and an educator who connected a student to the program) to get their initial perspective about it.

“I am starting to get more interested in manufacturing,” says Jeremiah Hall, a senior at the Academy of Scholastic Achievement on Chicago’s west side.

In the first few sessions of the program, Hall says, “we talked about a  lot of interesting things – the definition of manufacturing, how to use tape measures, tools, and more. I like welding and engineering and want to know more about tools. Sometimes I’ll stay after school and do the class there, sometimes I’ll do it at home. My family, we are a bunch of hard workers – I get my work ethic from my mom and dad.”

Hall says he hopes to go to college and study psychology. He has worked in part-time jobs in the food industry in Chicago as well as Elkhart, Indiana, where he used to live. He also wants to box as a welterweight and is training to pursue his dream of boxing on a professional level.”

He adds that he tries to stay busy and avoid tough situations that can affect youth in his community. “If somebody has been arrested, or there have been gunshots, we may hear about it. But I want to have a plan, and taking this program is part of my plan.”

What would he tell other students about Manufacturing Connect? “I would tell them that it will help you gain more knowledge and find a good job,” he says.

Yazmin Barajas, a senior at the Instituto Health Sciences Career Academy on the city’s south side, says a teacher at her school informed her about the Manufacturing Connect. “OK, I thought, this is a place where I show my potential and also get more experience she says. “For women, there are no examples of women who do this – and that was a huge motivation for me to get into this program.”

Barajas, who says she would like to be an interior designer someday, adds that it is especially important to her for young women to have strong opportunities to join the workforce. “In my community, normally it is the women who stays at home and takes care of the kids. Not many women in my community get involved in manufacturing work.” She adds that in her community, “women get paid less than guys. My mother doesn’t receive the same amount as my father could for the same job.”

She lives on the south side, near the McKinley Park and Bridgeport neighborhoods, and says persisting issues affecting young people in the community include violence and pollution.

In the program, she has learned about how to use a tape measure, how to convert fractions, and, in general “how to make your measurements more precise.” Barajas  adds that “for this program to allow me to have an opportunity to use math, that was really beneficial to me. I really like math, and this was very interesting to me.”

Meanwhile, she continues to pursue a wide range of interests on her own. “I am a really curious person, and I like to learn about philosophy, mental health, and psychology and nutrition, and learn about new languages. I try to educate myself on a deeper level by going to the library or watching videos on YouTube.”

“The Manufacturing Connect program,” she says, “is giving me experience and knowledge. Learning is something I’m passionate about.”

Like many high school students in the city’s underserved communities, David Curry says that while growing up on the city’s south side, violence has been a part of life. “It gives you a reason to get out of the neighborhood – or it can motivate you for something worse,” he says.

Early this year, he found an opportunity.  In January, Curry, a senior at Harlan Community Academy, started the Manufacturing Connect program. He hopes to go to college, but wanted to work first. “I  want to take advantage of this program as much as I can,” he says.

Curry, who works part-time at a restaurant in his community, says he loves building things. In the first sessions of the program, he learned how to use a tape measure, among other skills. He adds that he learned about Freedman Seating Company, a Chicago-based company that builds seats for public transit, and other forms of transportation, on a video through the program. “If I continue to participate and pay attention,” he says, “eventually it will help me in whatever area I go into.” He is interested in construction, civil engineering, and computer engineering. As a high school student, he has  built a website, taught himself how to sew, and says drama is one of his favorite classes at school.

What would Curry tell peers about the Manufacturing Connect program? “I would tell them that it’s an opportunity. It’s a good program that can help you go right into the workforce after high school.”

Daviea Freeman, who is a digital media instructor at Harlan Community Academy, has first-hand knowledge of how the program can benefit high school students – including David Curry, who she has worked with. Freeman worked at Austin Polytechnical Academy when Manufacturing Renaissance started a program at the school. She was one of the founding teachers at the Academy.

“One of the unique parts of this program is that students are able to learn a skill set and practice it,” she says. “It also allows students to learn important skills they’ll need to get a job – how to dress for work, how to communicate, what questions to ask.”

One student Freeman has worked with at Harlan, David Curry, started the program in January. “To see him be involved and engaged, asking questions, and gaining what he needs to gain from every session, is amazing to see,” she says.

She adds that student at the school face a range of challenges, and that a program like Manufacturing Connect provides them with an alternative. “Our students – no matter what neighborhood they are from – all struggle with the mindset of being safe. We want to allow our students to be exposed to life beyond their neighborhoods. It’s a struggle to see certain students come to school every day with a lot of baggage. It’s also not just about getting to school – in many cases hey have to help mom or their siblings, they have other responsibilities. They face so many different barriers. To do something that is motivating is always a plus.”

“We’re looking forward to building each year with this program, and encouraging more students to be a part of it,” she says.