Hiding in plain sight: how manufacturing can save Chicago 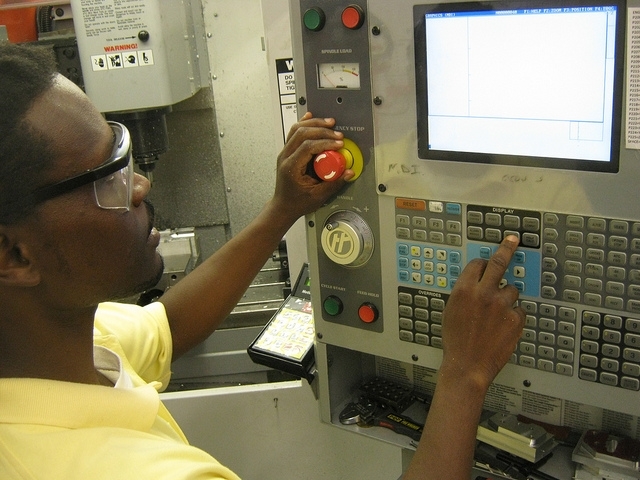 Industrial land sitting fallow. Jobs sitting unfilled. Successful businesses with no succession plan. Young people without a clear path to the middle class. One solution? Rebuild our manufacturing sector in a way that includes all the zip codes in our region—inclusion & industry 4.0

Chicago is in an existential crisis: increasing income inequality, rebellion, a 30-year gap in life expectancy between communities like Streeterville and Englewood, discrimination, violence and murder, and increasing budget deficits. The public has seen these challenges in the past but assumed that they could be corrected or at least reduced. We now know that this is no longer the case. The challenges we face will continue to worsen unless there is a fundamental change in the way we function as a society.

The optimism that seems to be disappearing had its roots in what Carl Sandburg called “Chicago, the city of Big Shoulders.” Chicago was the industrial center of our country from the early 1900’s until the 1960’s. Manufacturing jobs attracted millions of people from the American South, Europe, and Asia. There were economic disparities and discrimination of all kinds, but also, a broad middle class with job security.  It was common to work for the same company for 20-30 years. Workers in manufacturing had wages that could support a family with one person working. Often the son was eager to take over the family business. The owners of larger manufacturing companies were wealthy and motivated by their desire for more personal wealth but also committed to the success of their company guided by a relatively long-term vision.

Then came the 1970’s. New information technologies allowed Wall Street and the owners of large manufacturing companies to make more money by disinvesting in, and, often cannibalizing the companies that they had managed for decades. As David Roderick, the CEO of US Steel, commented, “I’m in the business of making money, not making steel,” as he dismantled USS Southworks, one of the most profitable steel companies in the world, ravaging Chicago’s South Side communities. Industrial communities like Cicero lost 50% of their manufacturing jobs between 1980 and 1986 due to plant closings. In the 1980’s and 1990’s, Chicago lost 200,000 manufacturing jobs and close to 4,000 companies. The impact was greater than just the loss of manufacturing jobs.  Each manufacturing job has a multiplier effect, meaning that its loss ripples throughout the economy and results in job losses in other sectors—the local grocery store, the barber, the car dealer, and the banker.  The greatest impact of the loss of manufacturing jobs was on our South and West Sides, a reality that, combined with racist discrimination, resulted in the kind of persistent poverty we see today.

I founded Manufacturing Renaissance in 1982 as a not-for-profit research and consulting organization.  I had just lost my job as a production machinist at Taylor Forge.  I had been in production for 13 years as well as being the leader of a Steelworkers Local.  Some were saying that manufacturing was dying.  Others said the downturn was just in a short-term cycle.  I didn’t know who was right.  I formed Manufacturing Renaissance to seek an answer to that question.

Manufacturing Renaissance was the SWAT team for plant closings beginning with the Harold Washington Administration. If a company was in crisis, we were asked to make contact with the company and its employees to figure whether there was a problem that could be solved or if the company was in a terminal state due to reasons beyond our control.

We looked at scores of companies. Some were in a terminal state; it was important to acknowledge that reality and not waste political or financial capital on a losing proposition. On the other hand, every large major publicly traded company that we studied was being milked by Wall Street and its owners who were pursuing business strategies that focused on short term profits at the expense of long term viability. They were viable companies that could still be open today if guided by a long-term business strategy and by an appropriate level of investment. We’re talking about Stewart Warner, Ludwig Drum, Leaf Confectionary, Brach Candy Company, Taylor Forge, Western Electric, Wisconsin Steel, and others that employed thousands of workers.

Everyone knows about the large companies, but the overwhelming majority of manufacturing companies have fewer than 100 employees. We found that many of these companies were owned by Baby Boomer generation white men who were at the age of retirement yet had no one in the family who wanted to take over a manufacturing company in the city. If the son wanted to go into business, they’d want to go into the financial sector rather than make a product.

Based on the evidence, I firmly believe that proactive government, labor, business, and community-based organizations armed with timely and accurate information could have prevented 80% of the loss of manufacturing jobs and prevented the kind of poverty we face on the West and South Sides. The crisis we face in our communities was avoidable. It didn’t need to happen.

But if we understand our history, we can find solutions to the challenges we now face that are hidden in plain sight!

In the weeks to come, Manufacturing Renaissance will be publishing blogs about how we could directly confront the enormous social, economic, and political challenges our manufacturing sector faces.  Blogs will include:

Restoring the strength of our productive sector, becoming a global leader in advanced manufacturing, and building strong communities is within reach.