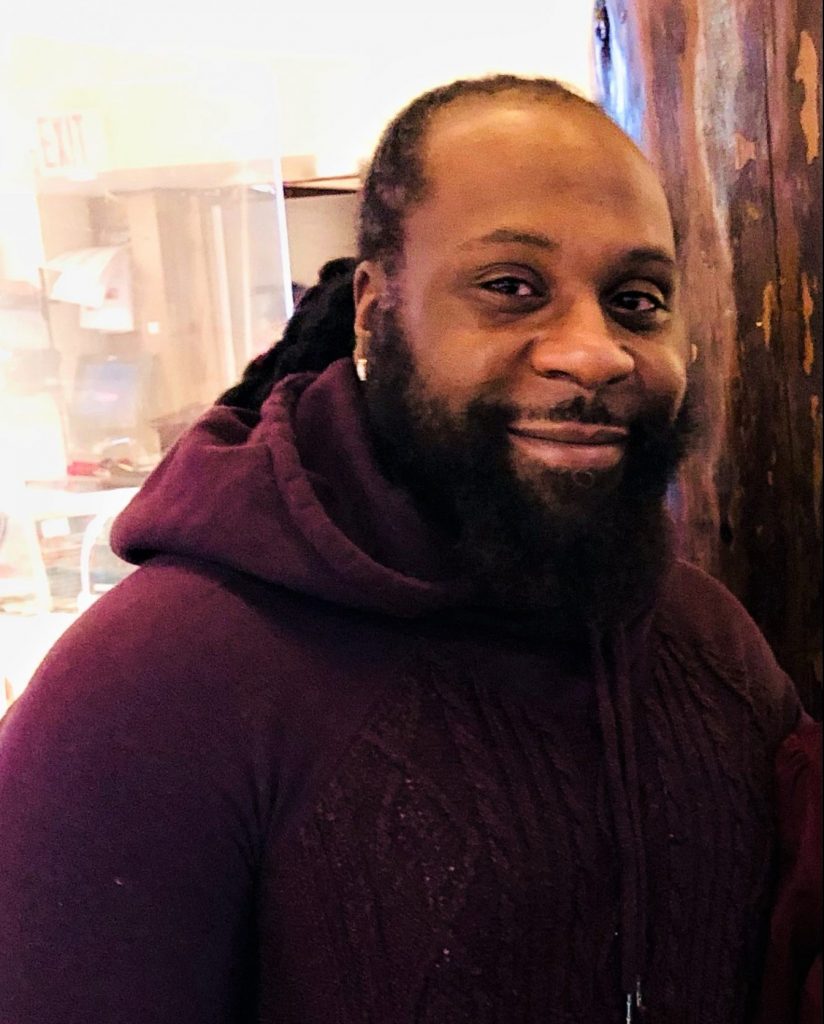 Brence Turner, Senior Machining Instructor at Manufacturing Renaissance, grew up in a family where numerous people worked in manufacturing. “I have seen the opportunities it gave them for a solid income, insurance,  a paycheck – and  a career,” he says.

Turner is a native of Chicago’s South Side. After high school, he attended Daley College and Chicago State University. Later, he went back to school at Wright College and enrolled in a Computer Numeric Control (CNC) program.

His path since those days reflects a range of experiences in the manufacturing sector that inspired his passion for teaching young people in the field. Early in his career, he did a three-year Journeyman Machinist apprenticeship through the Tooling and Manufacturing Association at Rexnord, an aerospace company in Wheeling, and rose to be a team lead at the company. He worked at Rexnord for a total of eight years. Later, he worked as a machinist for John Crane Inc. in Niles, which makes parts for oil companies, for 13 years. Along the way, he also had opportunities to train others and, as he says, “impart skills and information about manufacturing and machining.”

Later, Turner seized on an opportunity – or, actually, several opportunities. He attended Northeastern University, where he pursued a bachelor’s degree in education and majored in leadership training and development. As a student, he says, “Dan Swinney [Founder and Senior Advisor of Manufacturing Renaissance] was a big part of the readings I had. I saw how manufacturing can be an important vehicle to change communities.”

When talking about his experience, Turner frequently comes back to the theme of “opportunities.” He made the most of  opportunities during that time. While he was a student at Northeastern, he also worked full-time at John Crane and was an instructor part-time at the Jane Addams Resource Center, teaching skills that will be needed in manufacturing jobs. “My wife kept telling me I was crazy,” he laughs when recalling that busy time (Turner and his wife have five children). “But it was exciting.”

During that time, he also participated in an apprenticeship program at Daley College that Manufacturing Renaissance was offering for teachers in partnership with the Chicago Teachers Union, through which he learned technical skills.

“I introduced myself to the instructor, and talked to him about my passion for being an instructor myself,” he says. “My passion was for reaching the same demographic that Manufacturing Renaissance works with.” These experiences led Turner to Manufacturing Renaissance, where he teaches young people about manufacturing in the organization’s Career Pathways Services. Programs include Manufacturing Connect, which serves 14-18-year-old students, and the Young Manufacturers Association, a network and program for young adults, aged 18-29.

“There is a sense of social responsibility I felt as I got older,” he says. “There’s a stigma around Black and brown communities, but there are great people in these communities. It’s important to have an understanding that people need opportunities.” Many students, he adds, “are facing challenging circumstances that can include homelessness, food insecurity, social and emotional issues, COVID, and violence. These are still kids,” he says, “and they are smart and eager to learn. When I talk about complex manufacturing terms and how a machine works, they get excited and get it – and most get it quickly.”

In person, Manufacturing Renaissance classes often have 15 students; online, a bit less. Students learn about occupational safety, different types of materials, how to use precision measurement instruments, and how to read blueprints. “I elaborate that learning about these topics is not just going to help them as workers, but to own a company or be a supervisor someday.”

“During the pandemic,” he says, “we’ve had to change the program a bit and make it engaging and interactive for online learning,” he adds. “We were able to create a space where students could learn. We kept the program moving. Yes, I was concerned about how to impart information virtually. But it’s human nature to adapt.”

Turner says that 90% of the students who participated in the Young Manufacturers Association during the pandemic received credentials from the National Institute of Metalworking Skills (NIMS).

Turner emphasizes that his work focuses on “building relationships so I can start fostering and implementing the transfer of knowledge. It’s also so important to build on the fundamentals. What I try to do is encourage students to have faith in themselves that they have the ability to understand what we teach.”

Turner says that in the future, he sees the potential of these programs to be offered on a bigger scale. Part of that, he says, can also involve working with employers to provide specialized and structured on-the-job training of employees.

Meanwhile, he remains focused on the challenge of teaching and encouraging young people to prepare for opportunities in the manufacturing sector. “Our team works to make sure that students get what they need and that they are supported,” he says. “I’ve been honored to be with youth, answer questions, and give some guidance.”