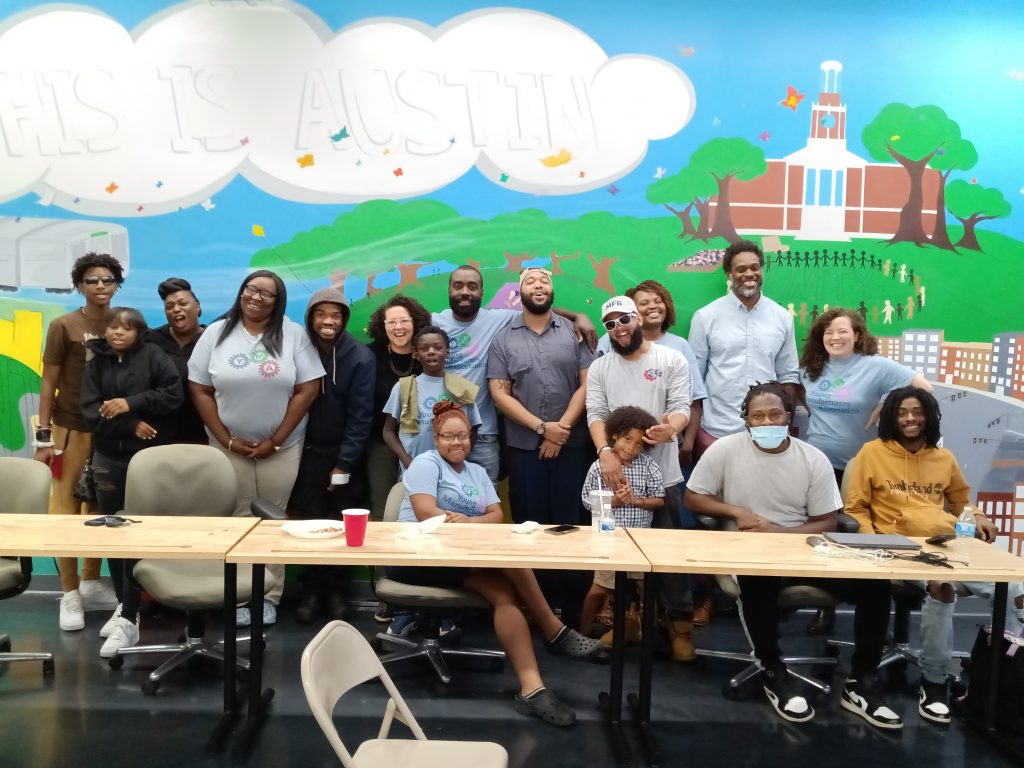 Andrew Crowe has seen it all – enough to fill a very long story about his life. These days, he is doing something else: sharing his story and what he has learned to inspire young people in underserved communities about the great potential of working in the manufacturing sector. Andrew “the Mfg” Crowe works to bring youth and manufacturing communities together and created the New American Manufacturing Tour, a nine-city speaking engagement that culminated with his appearance at the International Manufacturing Technology Show (IMTS).

On September 15th, Crowe took time out of his very busy schedule as a speaker at the IMTS to make his way to Austin Coming Together offices on Chicago’s West Side to spend time with alumni and current participants in Manufacturing Renaissance’s Young Manufacturers Association (YMA). Crowe brought along with him friend and engineer Dr. Onome Scott-Emuakpor, wife Whitney Crowe and two of their four children, to share their stories of overcoming “isms” in the work place. Crowe and Scott-Emuakpor poured into our  young people and gave them insight into what is required for success while being Black in the manufacturing space. After an hour of sharing stories, pizza, a sneak peak of Crowe’s latest media project, YMAers left feeling seen, animated and uplifted.

Crowe’s story does not just share a “you are not alone” message to young people. It shares a message that there are many opportunities for jobs in the sector – jobs that can be a ticket out of a life on the streets and into a career pathway that can lead to more opportunities and support a family. Crowe is married to his high school girlfriend and they have four children.

His story is inspiring, but it’s also timely. Many manufacturers in this country are on the lookout for skilled employees and have been for years. Meanwhile, as a recent story by The Wall Street Journal pointed out, U.S. companies are reshoring jobs from China “at record levels.” Crowe points out another key trend: The workforce in manufacturing companies is aging – and young people who live in underserved communities and need jobs can qualify for those jobs if they can learn the skills that are needed for them.

Crowe knows all about growing up in tough circumstances and a life of ups and downs. “I grew up in St. Louis, Missouri,” he says, “in a zip code that had the highest violent crime and murder rate in the city. I saw my mom work three jobs. The school district was underfunded and didn’t have teachers to teach regular subjects or STEM. So in my mind, my options were very limited. The only people not struggling in my neighborhood were the drug dealers or gangbangers.”

He adds that “when people came into our school for career day, it was usually older white men who didn’t understand me.  I didn’t think success in the jobs they talked about was attainable.”

At one point, he was in college on a football scholarship and was selling drugs at the same time. After he was caught and wound up back in his old neighborhood, Crowe says, he thought “My goodness, I screwed up. People in the neighborhood were looking up to me, and I dropped the ball.”

He describes a life of being in an out of jails and prisons. When he got an opportunity to work for a manufacturing company, he says, “My mind was blown. I felt like a kid in a candy shop. I felt like my life had started. I had never thought about how things were made and got to our shelves.”

His career path, however, crossed another major challenge: racism in the workforce. At one job, he says, “The more I rose, the bigger the target got on my back. The ‘n’ word was sprayed on machines. My toolbox was broken into. And so on.”

Later, he held jobs with an aerospace company in St. Louis and learned how benefits like health insurance had a profoundly positive effect on his family. Once again, though, he encountered racism in the workplace, and wound up working “on the streets” again – and back in prison. “I did well at doing bad,” he says.

Crowe says that this time while he was incarcerated, he accessed reading materials through a library system and came across writings about manufacturing, including works by Dan Swinney, founder of Manufacturing Renaissance. When he got out, he joined his wife in Tampa, Florida and “doubled down on manufacturing.” An opportunity led to a growing sales position – but, he says, the company found out about his past, and he lost his job.

“I really wanted to give up,” he says. But he persisted – and eventually found a company that was a good fit back in the St. Louis area. “It was diverse, paid a lot, and the owner would come out and shake everybody’s  hands. He knew me and my family. I felt part of the situation, and really blossomed as a machinist and person. It was the kind of manufacturing environment that can change the world.”

By this time, Crowe was already sharing his story to  youth groups, schools with underperforming kids, and other organizations. That’s when he got an opportunity to head a department at Ranken Technical College in St. Louis, where he could head a department and reach the community.  He was the only black person on the staff.

Crowe kept sharing his message, and is now finding that more and more people find his story compelling. He gets the message out about his story and manufacturing by doing podcasts, giving speeches, and maintaining a growing presence on social media. He has even presented to the Department of Defense about how to build the nation’s industrial base. In addition, he is the subject of a short documentary about his life and work.

For Crowe, though, this story is not really just his story, but a larger story about how manufacturing can be a key answer for young black and brown  people looking at their future – and companies that can hire them. These days, he tells young people that there are not only jobs in manufacturing – but a range of jobs. “For every machinist position, there are other jobs – in the front office, in logistics. Your first job in the sector can be a foundation. The question, he says, is “What are you going to do with your life? The decision you make today will change your future.”