An International Exchange, and Friendship, Continues between Chicago and Australia 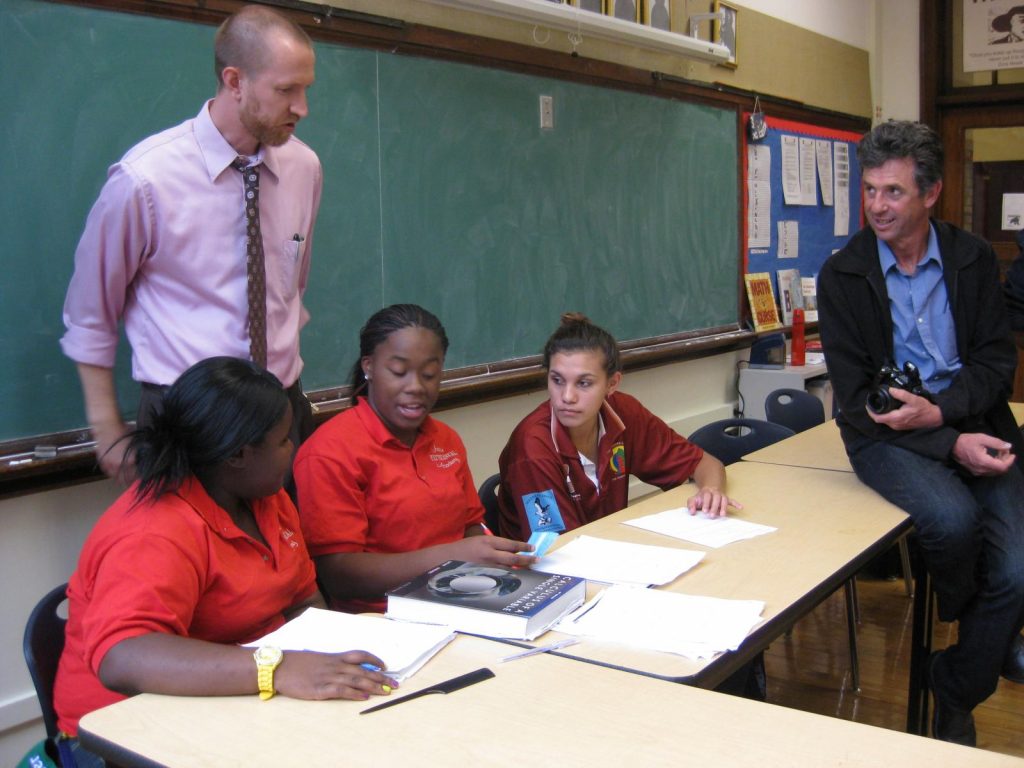 Manufacturing Renaissance programs serve youth and young adults in underserved Chicago communities, but the reach and relevance of the organization’s training programs extend well beyond the city.

One example is how these programs and the Renaissance’s model have impacted leaders who have worked in the manufacturing sector in Australia.

Peter Botsman, an Honorary Fellow at the University of Melbourne, set up a delegation visit to the United States in 2011 as part of the Indigenous Stock Exchange in Australia, an organization that works to share knowledge and raise finances as well as provide one-on-one support to aboriginal people and communities. (Botsman is also a former director of the Evett Foundation, the foundation of the Australian Labor Party). During the trip, the group visited the Austin Polytechnical Academy of the Center for Labor and Community Research, which later became Manufacturing Renaissance. At the time, the Academy partnered with over 65 local companies to prepare students for jobs in manufacturing and related sectors.

Botsman says that visiting the Austin program was part of an ongoing dialogue between the Renaissance and people outside of this country who are open to learning about ways to improve the manufacturing sector.

“What the Center was doing in Chicago was eye-opening for all of us. It was way ahead of everyone else,” says Botsman. “One thing we learned was about how minorities were so badly affected by the decline in manufacturing in the U.S.”

The program showed how teaching a range of skills in the field prepares people for the workforce – and for good jobs in a sector that needs high-skilled labor. The program offered the kind of training that young people were not getting then – and, for the most part, are still not getting now – in area high schools.

For a week, the delegation learned about a model that unites business, labor, government, education, and community leaders in support of advanced manufacturing in the Chicago area. A local newspaper, the Austin Weekly, covered their visit to the West Side of Chicago.

The Renaissance’s experience with leaders in the field from Australia actually dates back to more than two decades ago. In 1998, Botsman was involved in a conference that invited labor activists from all over the world. Dan Swinney, founder of Manufacturing Renaissance, was one of them. Swinney also visited Australia in 2011 to share the Renaissance’s vision, programs, and experiences with businesses and organizations across the country.

Botsman refers to the work of Paul Briggs, who was on the trip to Chicago in 2011. Briggs’ work in community development has leveled the playing field for aboriginal communities. “He’s worked in a similar way to Dan through the Center for Regional Excellence and its focus on creating high-level businesses,” says Botsman.

Meanwhile, Andrew Dettmer, National President of the Australian Manufacturing Workers Union, reflected on how Manufacturing Renaissance has affected his thinking about manufacturing issues. Dettmer visited the program in Austin in 2015. “Manufacturing Renaissance is an example not only of labor and capital working together, but trying to develop a common understanding that can help lead to prosperity,” he says. “What Manufacturing Renaissance does is provide a voice for workers in the halls of capital.” He also recalls a visit to Freedman Seating in Chicago, during which he observed how the company trained workers who graduated from the Austin program.

During his trip, Botsman says, the group learned about the Center and its students through visits and discussions that covered the city’s economy, history of African-American communities, tours of companies, and an analysis of the state of manufacturing in the city.

Botsman wrote: “The principal focus was direct skill acquisition for at risk communities and the importance of focusing on skill gaps in high end manufacturing community. The vision of the Chicago community is that manufacturing is the basis for an advanced and sustainable society.” He also noted that “Manufacturing is the only sector that can build a broad-based middle class and significantly reduce poverty. It is the only sector that can solve the environmental crisis. It is a sector that can provide careers that build capacity during work as well as provide a high standard of living outside work.”

More than a decade later, these themes are as relevant as ever. In the last year, Manufacturing Renaissance has played a leading role in advancing policies and building a coalition to promote national legislation that will bolster the manufacturing sector in this country. The Renaissance’s Career Pathways Services programs – Manufacturing Connect and the Young Manufacturing Association – continue to reach high school students and young adults in Chicago.

Swinney says the Renaissance’s work is tied to a global vision of how manufacturing can work. “Manufacturing Renaissance is a small organization, but we’ve always had a deep understanding of international best practices in manufacturing,” he says, citing the work of the Mondragon cooperative in Spain, among other examples. “We see ourselves as part of global movement.”