A Look at the Future: Students Visit the International Manufacturing Technology Show 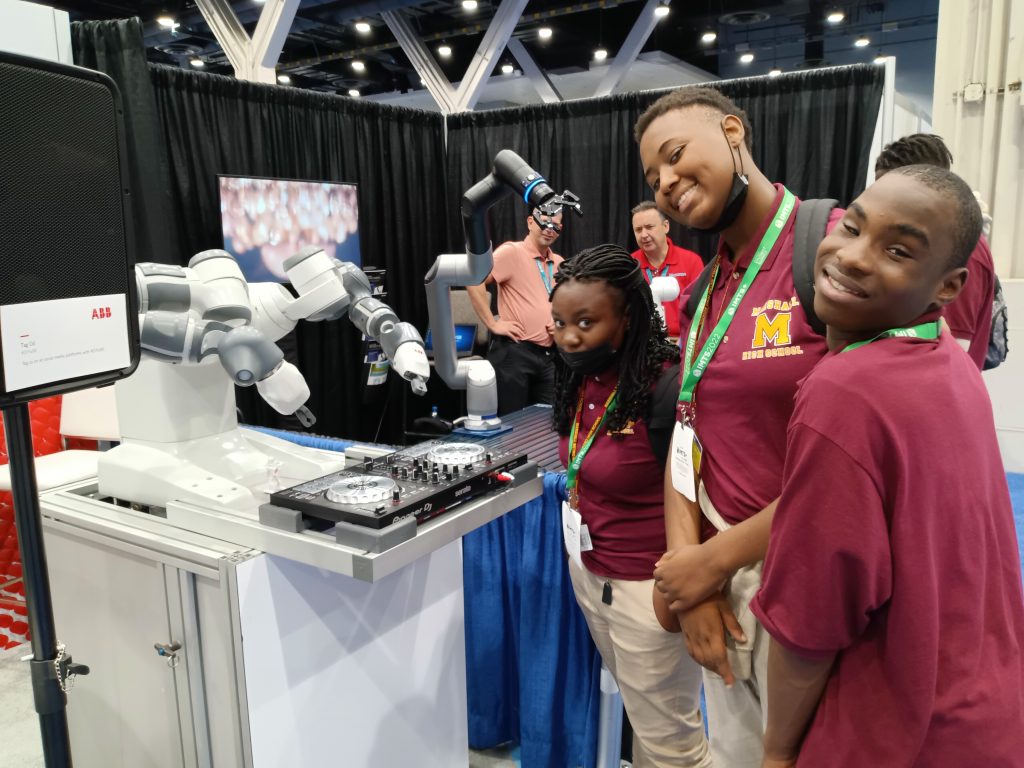 Staff from Manufacturing Renaissance led students and chaperones from Marshall High School at the event. Many partners of the Renaissance also participated, including Wright College, Triton College, and Prosser Career Academy. A member from Daley College in Chicago also joined a tour of the IMTS event.

IMTS is one of the largest advanced manufacturing shows in the country. This year’s event attracted more than 86,000 participants, according to organizers. More than 1,200 exhibitors  participated in the biennial event, which took a four-year break because of COVID. IMTS highlighted laser, CNC, metal forming tools, and 3D printing as the sector continues on the path to a more digital future.

“Our involvement in this event was really about getting young people inspired about manufacturing,” says Sarah Mercado, Director of Career Pathway Services at Manufacturing Renaissance. “We partner with Marshall and many other schools to make that happen.”

Robots were everywhere at IMTS. Students who are often only exposed to videos of the latest technologies had a chance to see them in action – and in person. Learning about technology in this way is especially important for students, as they were exposed to many opportunities that may come up that involve the building, programming, repairing and maintaining of robots and other new technologies.

“The kids were really into it,” says Dee Dee Jones, Industry Coordinator for Manufacturing Renaissance. “They were asking questions, taking photos, making videos and actively participating in this event.”

Students had an opportunity to learn about manufacturers as well as colleges that train students for the sector. Jones adds that “the majority of these kids love games, and they will often need the same skills sets in manufacturing. You’re trying to get a machine to do what you want it to do.”

One student who visited a booth of the National Institute of Metalworking Skills (NIMS) learned firsthand about opportunities in the field. He interviewed Montez King, President of NIMS, who offered the student an internship on the spot.

Andrew Crowe, who heads the New American Manufacturing Renaissance Tour and presented at IMTS, also spoke at a follow-up event that involved participants in the Young Manufacturers Association program.

“He was excited to see our students,” says Jones. “He shared an important message with them – he said that ‘just like you I didn’t know what manufacturing was until I started doing what you’re doing right now.’”

Jones adds that, for many students, the IMTS and other events that expose young people to the world of manufacturing share information and a vision of the field that they may not hear elsewhere. “Nobody is explaining that there are careers in manufacturing out there,” she says.  “So many of the schools – most of them – haven’t taught students about manufacturing in more than 10 or 15 years. When students come to an event like this or we make a presentation to them, that is when the light bulb goes on for them.”

Meanwhile, Manufacturing Renaissance continues to emphasize exposure events for students in the coming months. In early October, the Renaissance took another group of Marshall High School students and Young Manufacturers Association participants to Dakkota Integrated Systems in Chicago, which makes products for automotive and other industries.  Later in October, young people visited Freedman Seating in Chicago. “Once students visit a company or learn about it at an event like IMTS,” says Jones, “it can really spark their interest in manufacturing and what opportunities might be available to them.”